Today you’ll hear about a place you probably didn’t even know existed. What’s more, we’ll urge you to explore it. Even at the expense of missing the big attractions! Are you ready for the ride?

Turkey is not the no. 1 destination for most travelers. And for those who do come to the capital, it’s often only to visit the touristy part of Istanbul. Only a few know what else awaits them on the other side of Bosphorus canal.

Istanbul can be roughly divided into 3 major areas, of which two are in Europe. One is the well-trodden “tourist district” that visitors get to know really well. It’s here that the famous ottoman palaces sit alongside the grand bazaar, touristy Hammams without a local in sight, and expensive restaurants…

The second part on the European side is the busy business and shopping district; very cosmopolitan, it boasts fashionable cafes and brand stores, fearless traffic jams and has the “proper” atmosphere of a modern town… luxurious with a shiny, glossy feel.

And then you have the Asian Side…This side is very local and tourists rarely venture here, which is surprising because it’s actually quite close. Üsküdar is the main town after getting off the boat and immediately makes you feel disoriented – in a good way!

Üsküdar’s side of the Bosphorus canal (photo source: Ayfer Simms)

In Üsküdar, the Hammams aren’t for tourists, they’re for locals. These aren’t for showing off the culture to visitors, but instead are there for people to wash while relaxing, and what’s more, most of these hammams are a century old! There are also numerous ruins to see, old mosques frozen in time, and lots of old wooden dwellings that have somehow survived modernization.

The Asian side is quite green, so if you’re looking for an authentic experience far from the noisy tourist path, you’ll enjoy the low-key picnics, strolls around small streets and perhaps even enjoyment at not being hassled every second to buy something…here, nobody tries to take advantage of you being a foreigner, what you pay is what everyone else pays!

Markets where foreigners and locals alike pay the same price for everything: from food to household items (photo source: youropi.com)

Üsküdar is like a village in the middle of the giant megalopolis. It’s hard to imagine that just one boat ride away, and now just one metro ride away, you can plunge into a very culturally different Istanbul far from the tourists and the business center.

What comes to your mind when you think of Istanbul? Could you believe, with 17 million inhabitants, it’s still possible to hear roosters at dawn?

Üsküdar and the neighboring small towns offer history, calm, good food, relaxing hammams…and the best view of Istanbul! The pier is a favorite spot to watch the sunset as it falls overtop the Topkapi palace and medieval Istanbul! 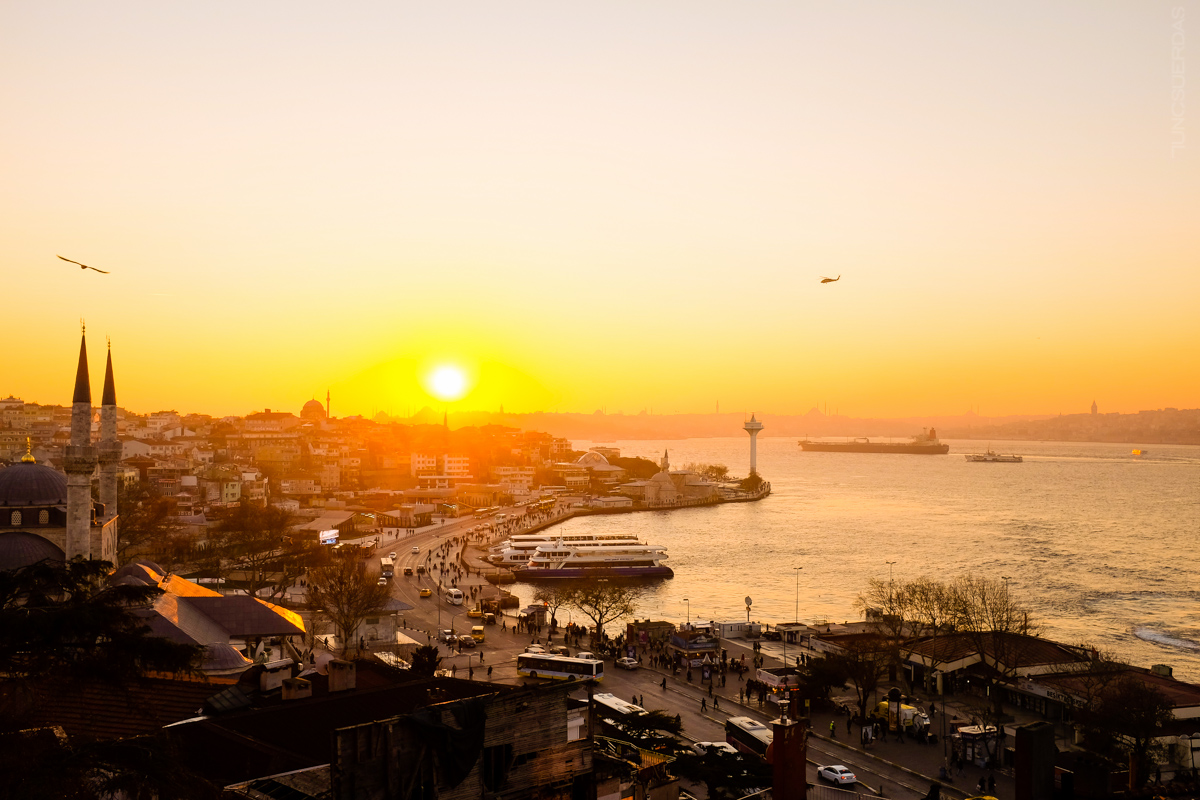 The best sunsets are from Üsküdar! (photo source: istanbulife.com)

Who Üsküdar is NOT for

If you love package holidays, big group tours and the minimum amount of engagement with the local culture, you’ll be fine staying in the first district of Istanbul. You only have to worry about pickpockets like in any other big city, and then can leave the ‘exploration’ part to the tour guides.

If you came for shopping, you basically just need the bazaar. You might splurge more money than you planned, especially if your haggling skills are not at their best, but you’ll be able to get a Turkish tea set or whatever else you came there for.

Visiting the second district, you can relax in cool cafes and spend some cash in the luxury stores. You’ll feel exactly like you would in a modern European city. So if that’s what you were looking for in Istanbul, you’ll probably enjoy it.

Who Üsküdar IS for

If you like to experience more than just major tourist attractions, and also really connect to the local culture, you’ll love Üsküdar. This is where you’ll meet locals, and only the rare tourist. This is where the real off-the-beaten-path magic happens. It’s not so often that you see such a special place so close to the big crowds!

Just when strolling through the streets of Üsküdar you can come across little treasures, like these ottoman-style doors (photo source: Ayfer Simms)

Mihrimah mosque as one of the best representatives of beautiful sights without tourist crowds (photo source: resimbul.com)

My personal love story with Üsküdar

I grew up in France, and Turkey was a place to escape to on long summer holidays. My dad would say, “Let’s go to Turkey today!” on a summery French morning. And mum would hurry to prepare some food for a 3 day-long-trip through the roads of Europe.

The journey was long and by the end of it all we wanted to do was get away from the car, all the good things to eat would be gone and we’d long to spot the signs we approached the Turkish border. Then, as we neared it, filled with great excitement, we’d wait in a long line of cars full of travelers pouring into the country for their summer vacations.

One of my most vivid memories is the sandwiches my mum made us full of fresh tomatoes and green chili peppers bought from a wandering seller.

Our senses arrived in the country before our body; the taste, the smell, and the atmosphere were already very different and seemed quite exotic.

After passing the borders, we’d still have some hours to go before reaching Istanbul, and a bit more to reach Üsküdar, but already it was magic… the lights spreading through the valleys of the legendary town, the local life unfolding in front of our hungry eyes.

When my dad parked the car in front of the old ottoman wooden house, we’d all get out as if in a dream.

These were the years stretching from 1978 and well into the 1990. Over that time I’ve seen Istanbul evolve, and most importantly I’ve seen Üsküdar slowly change.

Whilst keeping the wooden dwellings unchanged, despite their obvious decrepitude, roads have switched from dirt to concrete, a generation has slowly disappeared, leaving behind them a ghostly presence amid the old ruins: The traces of past civilizations and history fall under your every step in Üsküdar.

Despite the restorations of many of those buildings in the last few years, Üsküdar has managed to keep its subdued atmosphere; the shops have kept their smell – one that has lingered since I was small – of a mixture of spice and soap, and has kept that feeling of being in a great big village, a place that seems to exist between two dimensions. For melancholic people like me, the daydreamers, it is like stepping foot in a different époque, far from the buzzing Istanbul of the European side.

I remember my grandmother’s house before it was rebuilt. A wooden structure 100 years old, the ceiling was low and we had to lower our heads to enter the kitchen. Inside was a well, and buried in the house was a large red ceramic container that kept the water fresh even in the midst of the hottest summer days…

The ground would creak with every step on the upper floors, from the little crooked windows one could see the lush green garden growing all around and even catch a glimpse through the old wall, which dated back perhaps 400 years.

To feel this atmosphere one has to take their time in Üsküdar, the beauty is in all the tiny details.

Here I stand in front of grandma’s house, a few months before its reconstruction (photo source: Ayfer Simms)

Ayfer Simms is the Trip Designer of the Travelove Trip to Üsküdar. As you can see from her writing, she has long been in love with Üsküdar, and that is why she decided to fully move there. You can see all the activities she’s put together for you on the Üsküdar Trip page below.

Have you been to Istanbul? How did you like it? Has Ayfer’s description of Üsküdar raised your interest to go explore the city? What else would you like to know about Üsküdar?

I love Turkish Üsküdar so much that I decided to move here from France, where I was born. The life here is so different and so genuine. I'd like to show to all travellers how beautiful Üsküdar is, and make them experience this suburban part of Istanbul, which rarely any visitor comes to see.

Never miss another blog post covering one of your favorite destinations!

David Černý (pronounced chair-knee) is a Czech sculptor who has been known to stir up a bit of a scandal. His work, largely social-commentary…